As part of our aim to deliver an effective and proportionate system of voluntary regulation of charitable fundraising, we are committed to listening to the sector to find out how we can support it to meet the standards in fundraising. Just as we encourage you to listen and respond to your donors, we also believe this is essential for us to do too, so that we are best placed to support the organisations we regulate. So, for the first time since the Fundraising Regulator was established three years ago, we sought the views of organisations that are registered with us to better understand what we are doing well and where we need to improve. This will help shape our future work and ensure we remain responsive to the issues facing the sector.

In November 2019, we carried out an anonymous survey of our registrants; this included larger organisations that spend more than £100,000 on fundraising and fall within the fundraising levy, smaller registered charities, and commercial organisations. We contacted 3,782 organisations and we are pleased to report that 359 (9.5%) responded. Responses were representative of the three types of organisations registered with us. Questions included whether organisations have been using the Code of Fundraising Practice (the code) and supporting guidance, how useful our fundraising complaints reports and investigation summaries are, how organisations use and promote the Fundraising Badge and experiences of using our customer services.

This is the first time we’ve carried out a detailed registrant survey and we are encouraged by the number of organisations that took the time to complete the survey with such detailed responses. The results provide an important evidence base for our work in the year ahead and beyond.

The Code of Fundraising Practice

Our most significant achievement in the past year was the publication of the revised Code of Fundraising Practice. This was the first major redraft of the code in almost a decade to improve its style, presentation, clarity and accessibility. We asked if organisations had engaged with the new code since it was first published in June 2019, and 92% of respondents said yes. We are also pleased to learn that 75% agreed, or strongly agreed, that our main aim of improving the navigation of the code has been achieved. 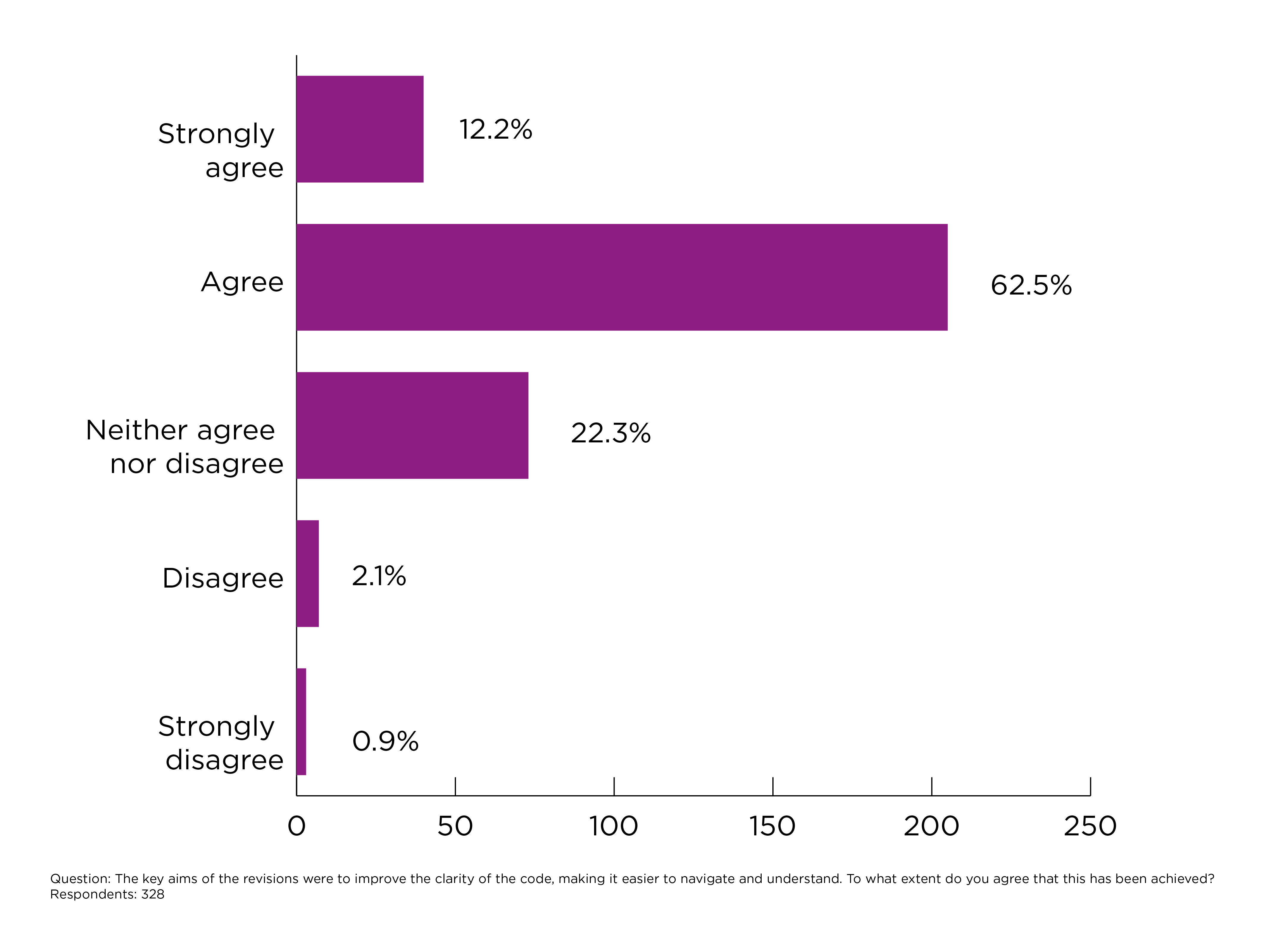 Of those who had used the revised code, 90% feel that it covers all areas of fundraising relevant to them. A few respondents made suggestions for additional areas that code might cover, including: major donors, corporate donations and emerging technologies. However, some respondents told us that they haven’t used the revised code because it doesn’t cover the types of fundraising they do. This type of feedback is valuable when reviewing the code in the future.

To support organisations to meet our standards we publish guidance and resources for fundraisers on our website. The survey found that 73% of respondents have used our supporting guidance and information and, of those, 82% found it ‘helpful’ or ‘very helpful’. 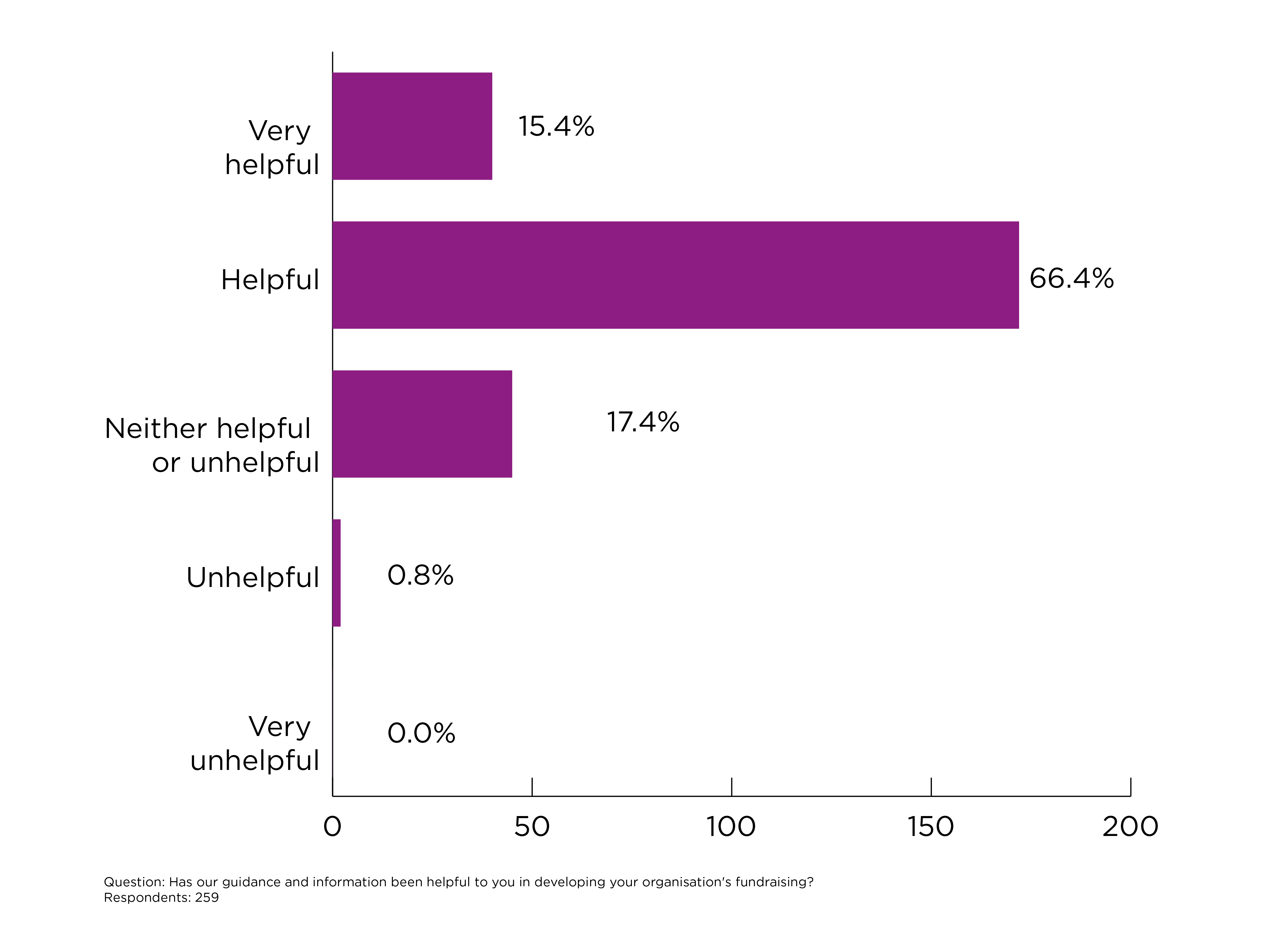 Respondents also told us that a lack of awareness of the guidance or time can be a barrier to reading our guidance and resources. We will work to better communicate the guidance we produce and look to diversify the formats we produce it in. A small number also told us they find the code adequate without additional guidance.

Our Annual Complaints Report (ACR) brings together data from our own investigations alongside fundraising complaints handled by the sector to share learning about fundraising practice and effective complaints handling. Nearly half (48%) of respondents said that they had read at least one ACR in the past. Of those that had read one, 75% told us that learnings from these were useful when reviewing their fundraising practices. This year, we are planning to seek further views on the future format of the ACR and these results are a valuable starting point.

Since our launch in 2016, we have published anonymised investigation summaries on our website so that other fundraising organisations can learn from them. However, from September 2019 we began naming the organisations in our published summaries. We took this decision in order to support a culture of ethical fundraising; allow the public, donors and potential donors to make informed decisions, and to ensure we are transparent about our investigations process. We now also include more detail in the summaries with the purpose of making them more useful for the organisations we regulate.

The survey found that just over half of respondents (52%) have read at least one of our investigation summaries, and of those 70% told us that they had found them ‘useful’ or ‘very useful’. It is encouraging that a significant proportion of respondents found these summaries useful, however these figures may be largely representative of the pre-September 2019 investigation summaries. We hope that these findings indicate that, over time, more organisations will use the summaries to inform their practice.

Similar to the feedback on guidance, respondents who had not read an ACR or investigation summary cited time pressure and awareness as the main reasons for this. This clearly tells us that we need to consider how we disseminate and promote the resources we produce, making them as accessible as possible for anyone who might find them useful. We will also reflect on how we can best write the ACR and investigations, which balances the detail and importance of the information, with the time needed to read and understand it. 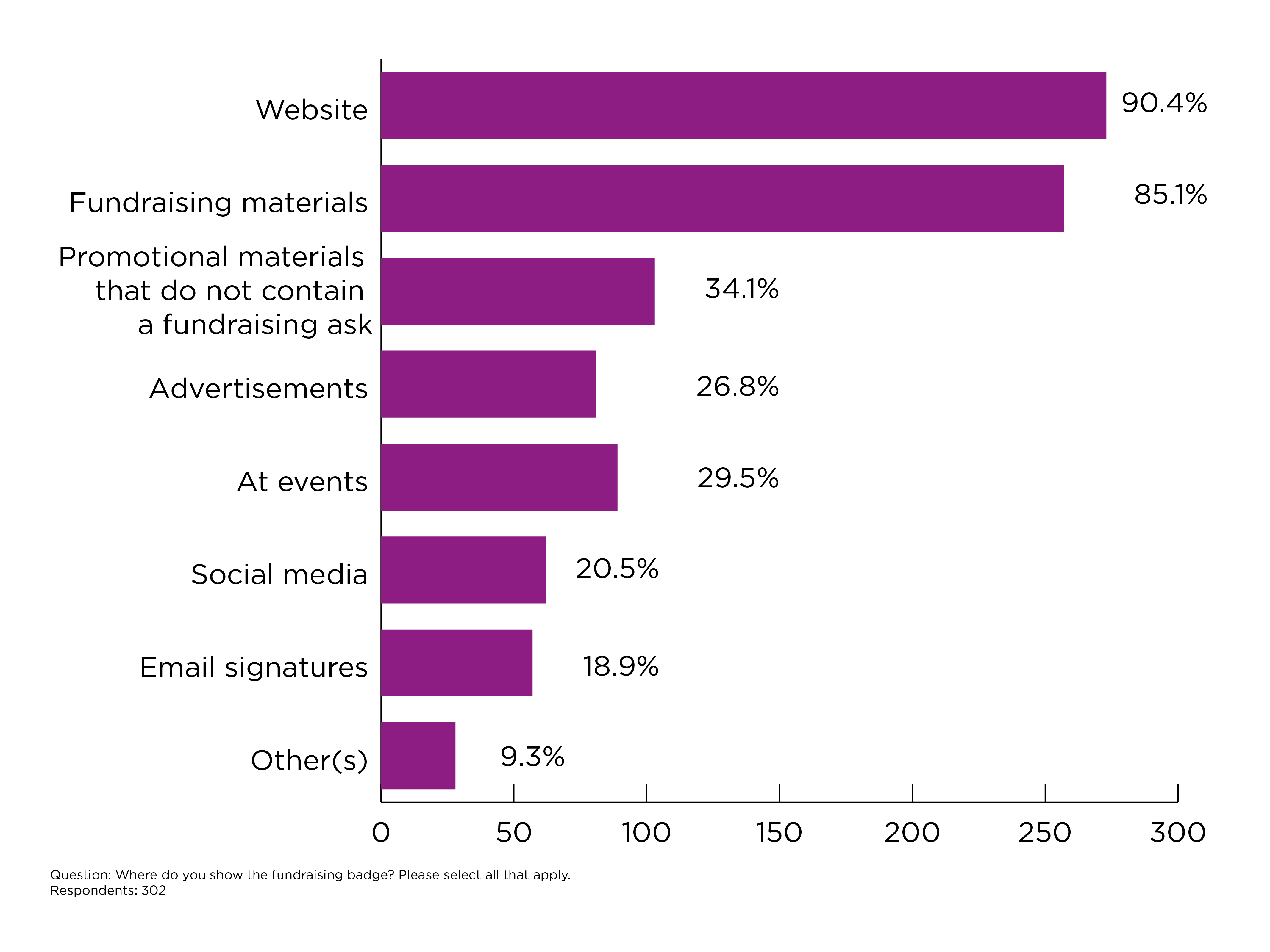 The most common reason for organisations not showing the Fundraising Badge was not having reprinted materials since registering with us. A handful of respondents also commented that the badge distracts from branding, or that they do not perceive a benefit to using the badge as the public don’t understand what it means. This is useful feedback, as we are currently working on a strategy to raise public awareness of the Fundraising Regulator and promote the badge.

The Fundraising Promise publically outlines a registered organisation’s commitment to clear, honest, fair, accountable, reasonable and respectful fundraising. It is primarily aimed at donors and the public.

The survey found that 64% of respondents said they promote the Fundraising Promise. The majority do this through their website, and several noted that it is used for training and policy development. Some respondents told us that they use a tailored version of the Fundraising Promise, have their own version, or signpost to ours. Those who do not promote it primarily said that they were not aware of it, or had not thought of using it. We will use this information to make sure we better communicate the purpose of the promise.

Organisations that register with us are given access to their own online account from which they can manage the information we hold on their organisation and download our Fundraising Badge. We learned that 71% of respondents have accessed the registered users’ area on our website. The most common reasons for this were to download the Fundraising Badge logo pack and our branding guidelines. 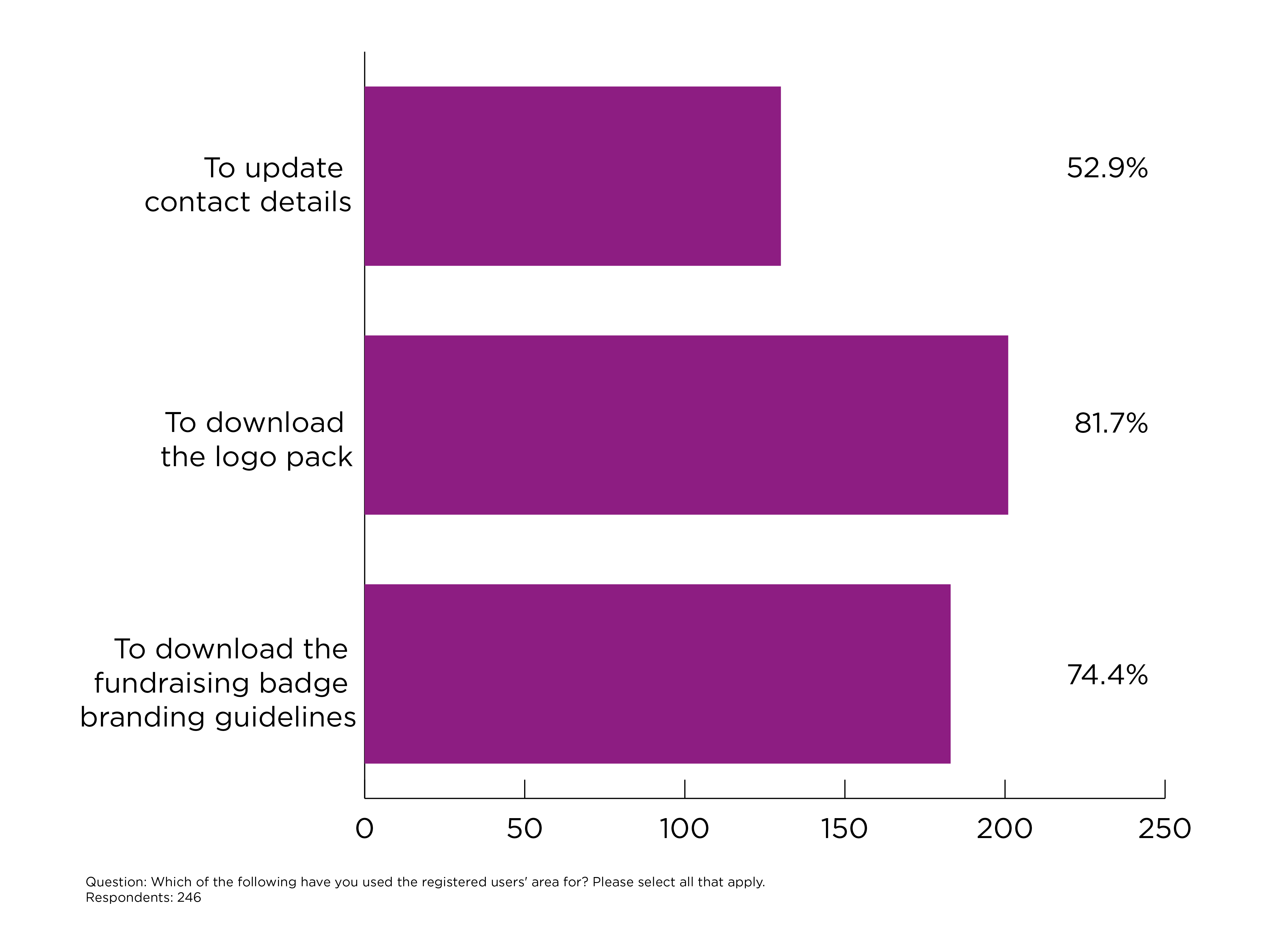 Of those who had not logged into the registered users’ area, 81% said that they did not know that it exists. As a result of this feedback, we will consider how we can better communicate with new and renewing registrants to make sure they are aware that they can use this area to update their contact details and download the badge to use on their fundraising materials.

Our enquiry and customer services

An important part of the regulatory services we provide is our enquiries line. We run this service so that the public, fundraisers and anyone else working in the charitable sector can ask us questions that are specific to their own fundraising. We give tailored advice to all those who contact us and provide information and guidance to help them understand and meet the standards the code. We learned that 21% of respondents had used our enquiries service and 69% of those that had used it found the experience to be ‘positive’ or ‘very positive’. 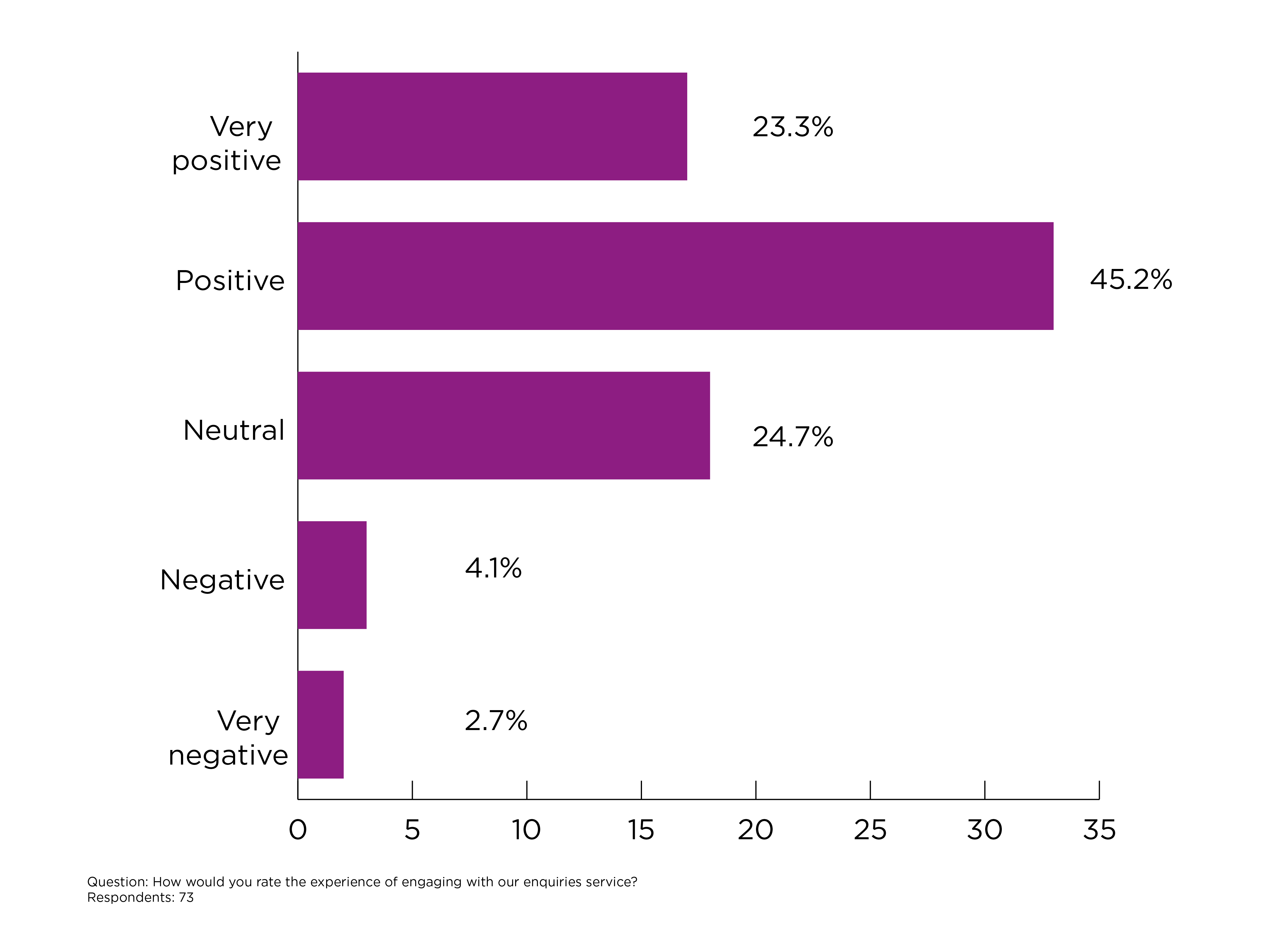 You told us that our staff who handle enquiries were helpful, and that we turn responses around quickly. However, some of you were not completely happy with the response you had received and the team will use this feedback develop the service.

We also have a team which investigates complaints about charitable fundraising and we asked respondents for feedback on our complaints process. Whilst only a small number (8%) had experience of engaging with this service, the majority found the experience to be ‘neutral’. We regularly review our complaints handling process, to make sure all complaints are dealt with in a respectful and effective way, and to ensure we reach all of our decisions based on compliance with the code. 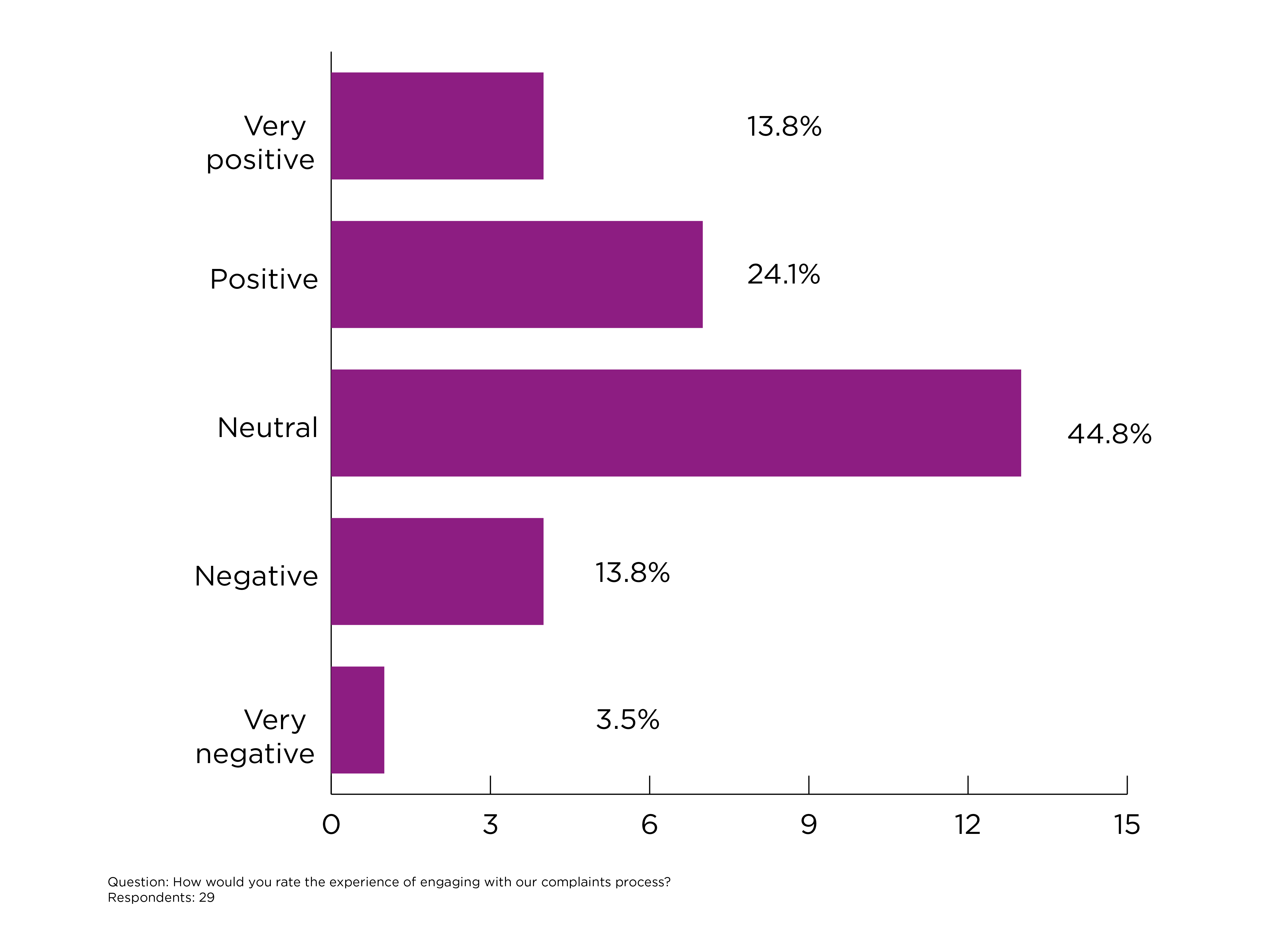 The Fundraising Preference Service (FPS) was set up in 2017 to allow the public to manage the communications they receive from charities. Charities must action these requests in a timely manner or they will be in breach of the code. We found that 23% of respondents have experience of engaging with the FPS, and more than half (56%) of these individuals found this to be a ‘positive’ or ‘very positive’ experience. We are in the process of evaluating the effectiveness of the FPS which this survey finding will feed into. 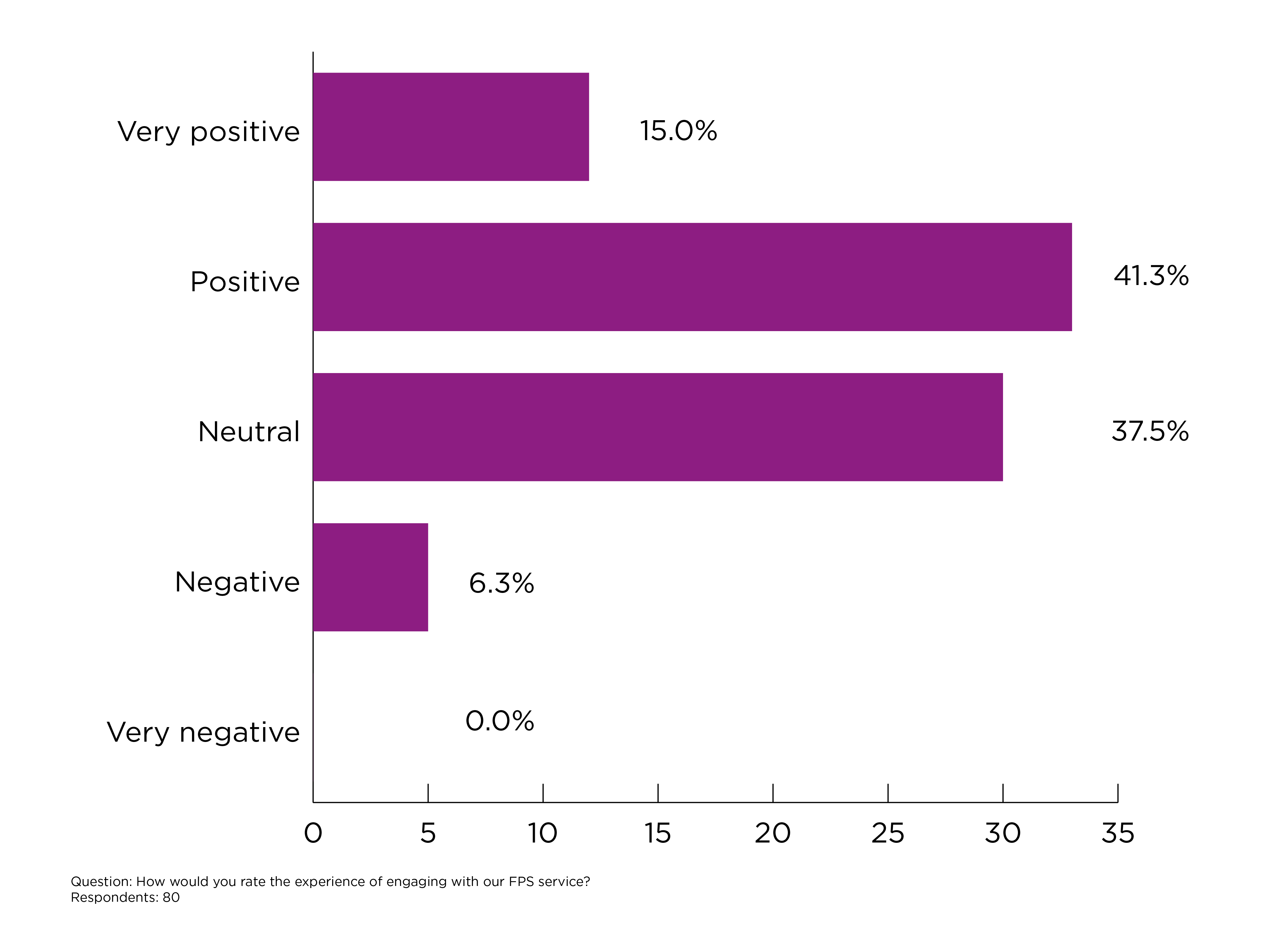 We were pleased to learn that 69% of respondents thought that the process of registering with us or paying the annual fundraising levy was ‘easy’ or ‘very easy’. After three years of operation, we are looking to review our registration process to make it as streamlined as possible for the organisations we regulate. 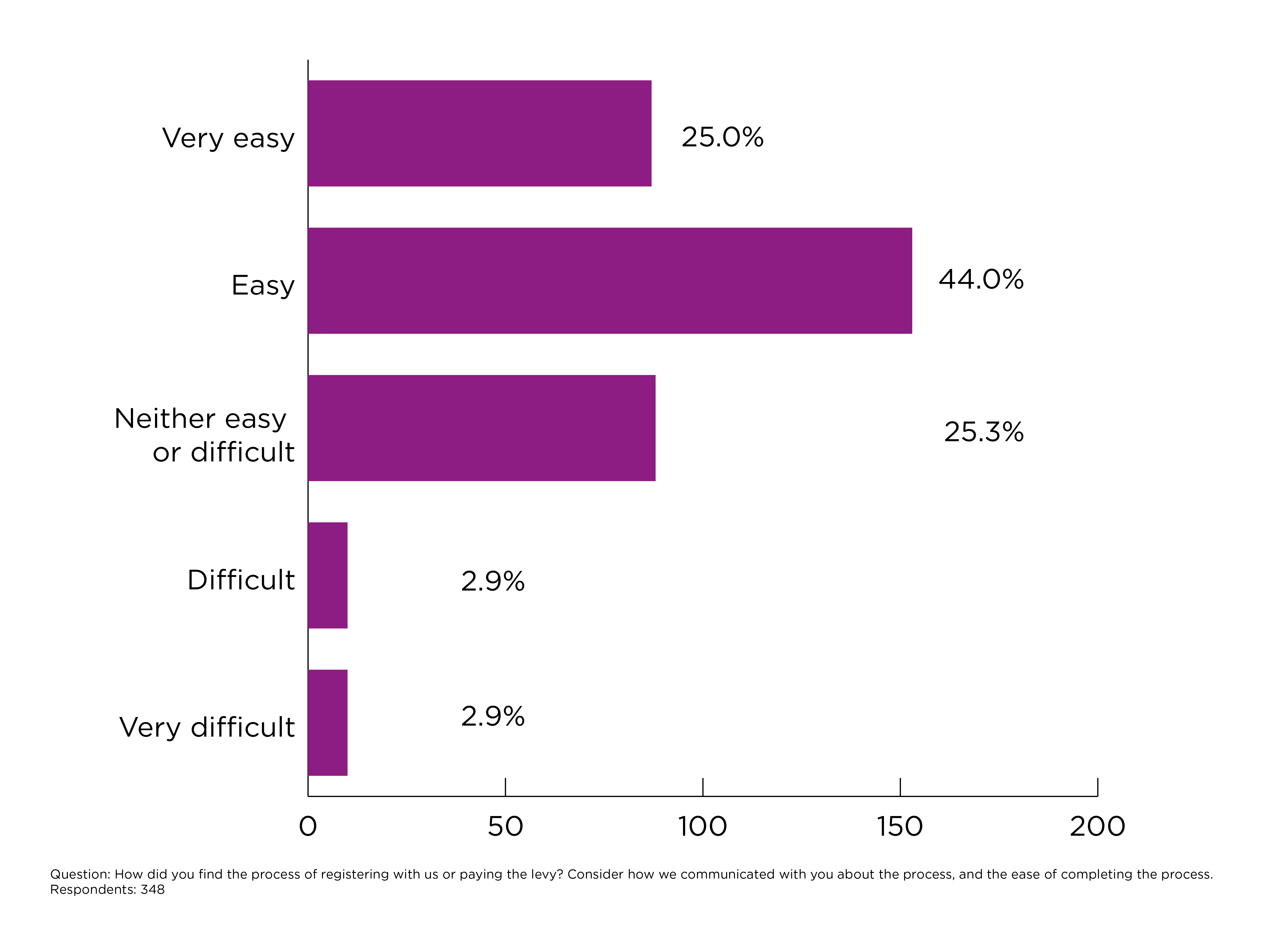 We also asked about motivations for registering with us. We were encouraged to see that by far the most commonly mentioned reason was public reassurance and enhancement of the organisation’s own brand. Keeping up-to-date with best practice in fundraising was also mentioned by many respondents. However, in contrast, several respondents noted that their organisation had felt pressured into registering or paying the levy. We’ll take this feedback on board to review our communications around the levy and registration and ensure we demonstrate the benefits of registering with us.