The Charities (Protection and Social Investment) Act 2016: an analysis of compliance with fundraising reporting as of June 2020

The Charities (Protection and Social Investment) Act 2016 (‘the Act’) requires charities to provide statements on specific areas of their fundraising in their annual report, which is submitted to the Charity Commission for England and Wales (CCEW). These statements cover key aspects of their fundraising activity including the approach taken, regulation, complaint numbers and how they ensure vulnerable people are protected. These statements demonstrate that they are reporting in-line with requirements, but also allow charities to help build public trust in their processes.

Earlier this year, we published an analysis of how 106 charities had reported on these requirements. This was the first time charities had to report on fundraising in this way, and whilst we found many had reported on aspects of the requirements, we found the majority were not fully compliant with the Act. This was not unexpected as this was the first year they had to comply with the additions to the Act. To build on this, we carried out a second review on the next set of annual reports charities submitted to CCEW. For this analysis, we have adjusted our approach to scoring the reports and increased the sample size so the findings are more representative of the sector. Due to our new method of scoring, comparison between year one and two is limited.

The aim of this review of reports is to provide a benchmark for the charity sector, highlight good practice and where there is room for improvement in the reporting of fundraising activity in-line with the requirements. We have used our findings to identify where the sector might need additional support in meeting the requirements through guidance. In this report we have not named organisations and all data is anonymous.

Requirements in the Act

(1) If section 144(2) applies to a financial year of a charity, the annual report in respect of that year must include a statement of each of the following for that year -

(a) the approach taken by the charity to activities by the charity or by any person on behalf of the charity for the purpose of fund-raising, and in particular whether a professional fund-raiser or commercial participator carried on any of those activities;

(c) any failure to comply with a scheme or standard mentioned under paragraph (b);

(d) whether the charity monitored activities carried on by any person on behalf of the charity for the purpose of fund-raising, and, if so, how it did so;

(f) what the charity has done to protect vulnerable people and other members of the public from behaviour within subsection (2) in the course of, or in connection with, such activities.

In June 2020, we reviewed annual account reports filed with the Charity Commission.  We reviewed each report looking for a fundraising statement, which addressed the requirements of the Act. If these were not in one place, we searched through other relevant sections to ensure we didn’t miss key information. We scored each report for its compliance, based on the information supplied for each requirement set out in the Act (a-f as set out above), with 1 meaning ‘present’ and 0 meaning ‘not present’.

To examine how well these statements were being communicated, we also separately scored on clarity and detail, and noted when the requirements were reported in one section. We piloted the scoring on 10 reports and included these in the final analysis. In addition, because three members of staff scored the reports, and to ensure consistency and quality of scoring, we reviewed one in five of each other’s scores.

We reviewed the annual reports of 10% of charities within scope for the fundraising levy, excluding higher education institutes and arm’s length bodies (1) (1,756 charities in June 2020 at the time of the survey). This totalled 187 charities.

Charities have a legal duty to comply with the Act, where gross income is over £1 million. The sample for this review was selected from charities that spend more than £100,000 on fundraising per annum, which strongly indicates that the charity meets the gross income requirements. To ensure we analysed the reports of a cross section of different size charities in terms of their fundraising spend, we randomly selected the 10% from each of the 12 levy groups. For groups that had fewer than ten charities, we randomly selected one charity to ensure there was representation across the groups.

To ensure we were looking at the most recent reports, charities that were overdue submitting their annual report were taken out of the review and replaced by another randomly selected charity from the same group.

The table below illustrates the sample size: 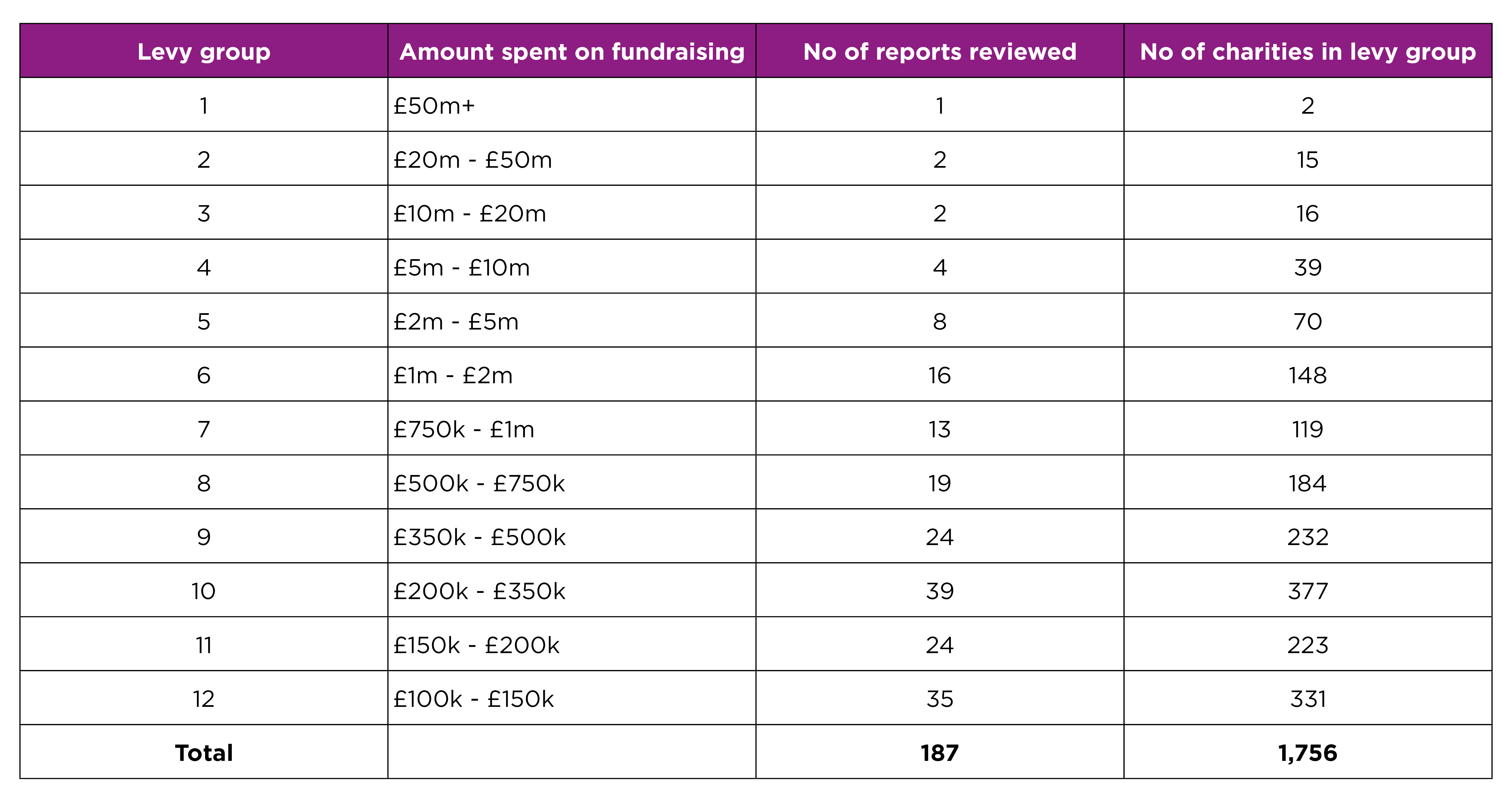 The findings are presented below in three sections: how charities reported on each of the requirements set out in the Act, how many they reported on in total, and the clarity and detail of their statements.

(c)    No reports mentioned failure to adhere to a regulation/scheme

The majority (8 out of 10) of charities included a statement which sets out their approach to fundraising. A smaller, but still large majority (just under 7 in 10), set out whether they were subject to voluntary regulation (for example, being registered with the Fundraising Regulator).

Around 6 in 10 included a statement about the numbers of complaints received in the past 12 months. Many of these were simply reporting that they had received no complaints, and some gave more detail on the complaints process.

Of more concern is that just 4 in 10 charities reported on how fundraising carried out on behalf of the charity is monitored, and only 4 in 10 included a statement on how they protect the public and vulnerable donors. Although this does not necessarily mean that charities are not monitoring fundraising or don’t have policies to protect particular groups, because it is not presented in the report, many charities are missing out on the opportunity to demonstrate their policies and activity which can help build trust in their fundraising processes.

The majority of charities did not report on all requirements of the Act.

Clarity and detail of reporting

Overall, when charities reported on the required sections of the Act, they did this through statements that were clearly written and with enough detail for the reader to be informed about the activity. Across all the statements, we found between 66-94% of charities reported them in a clear and detailed way.

For example, our analysis found that statements on complaints were the most likely to be clear and have enough detail (94% and 78% respectively), which were usually straight-forward statements of facts and numbers. Similarly, the statements on voluntary regulation and schemes tended to be reported in a clear and detailed way.

Although 79% of statements on what the charity has done to protect vulnerable people and other members of the public whilst fundraising were clearly written, just 59% of them contained the level of detail that might helpfully evidence relevant policy or activity.

Our analysis also found that 62% of reports had all statements in the same section, making it easier for the reader to find all the information linked to the requirements in one section of the report.

Although it is not a requirement of the Act, we see it as vital that charities communicate their fundraising activity in an accessible and meaningful way to the public, as well as reporting on the mandatory requirements.

Our analysis of how well charities are meeting the requirements of section 13 of the Charities (Protection and Social Investment) Act 2016 revealed near compliance in some areas, but there is still work to do to improve reporting.

Many charities are reporting in high numbers on fundraising approach and to a lesser extent on voluntary regulations and schemes, and complaints. However, we have identified that most organisations are not providing enough information about the reporting of monitoring of fundraising activities carried out on behalf of the charity, numbers of complaints and, crucially, what they are doing to protect vulnerable people and other members of the public while fundraising. This is just the second year that charities have had to report on these requirements, and whilst comparison between our last report and this one is limited because of the different approach to scoring, overall there is little improvement on year one.

Nevertheless, many charities are very close to meeting the reporting requirements. To support the drafting of future years’ reports, we have produced guidance which includes examples of clear and detailed statements. This will not only help ensure compliance with the Act, but that fundraising-related activity can be understood by the public and support increased trust in the sector.

(1) HEIs and Arm’s Length Bodies are ‘exempt charities’, so do not have to follow the same rules as other charities, including this part of the Charities Act 2016. However, the Fundraising Regulator includes them in the levy because they are charities that fundraise.